Leadership History of the Manhattan Project

SOON AFTER PRESIDENT Franklin D. Roosevelt received Albert Einstein's letter regarding the potential for a German atomic bomb, he formed the Uranium Committee under the chairmanship of Lyman J. Briggs. Briggs, the director of the National Bureau of Standards, started quickly by funding Columbia University with $6000 for atomic pile research.

&nbspTo take charge of technical projects directly related to national defense, Roosevelt established the National Defense Research Committee (NDRC) on June 15, 1940 and placed engineer Vannevar Bush in charge. Bush had already distinguished himself as the inventor of the "differential analyzer" (an early computer) and as President of the Carnegie Institution in Washington, D.C. The newly named Advisory Committee on Uranium was placed under the auspices of the NDRC. However, the military and technical focus of the NDRC left it incapable of fully supporting the mobilization of American science for the war effort. To remedy this, Roosevelt established the Office of Scientific Research and Development (OSRD) on June 28, 1941. Bush immediately took over as director, and chemist James B. Conant, president of Harvard University, took the reigns at the NDRC. As fall approached, Roosevelt increased the momentum of the atomic energy program by forming the "Top Policy Group," which included Bush and Conant, and made the decision to begin to hand the atomic program over to the Army.

&nbspOn December 6, 1941, Bush created the S-1 Section from the existing Advisory Committee on Uranium and placed it directly under Conant's supervision. As Bush's representative, Conant maintained oversight of the whole atomic energy program. While the S-1 Section oversaw several scientific programs, including atomic pile and nuclear material research, uranium isotope separation technologies, and heavy water production, it began plans to turn over pilot plant and engineering development and construction to the Army.

&nbspIn mid-June 1942, Roosevelt authorized the Army Corps of Engineers to take over all construction work and assume overall direction of the atomic bomb project. Bush concurrently reorganized the cumbersome S-1 Section into the smaller S-1 Executive Committee to supervise all OSRD work.

&nbspThe Army established the Manhattan Engineer District (MED) shortly before General Leslie R. Groves took command in September 1942. Soon after, the Military Policy Committee was established under the Top Policy Group to report on research and development policies, construction and production, and strategic and tactical matters affecting the use of the "S-1 weapon." Till the end of the war, the OSRD and the MED worked hand in hand to report directly to the President, build the foundations of modern-day "Big Science," and construct a nationwide nuclear weapons industrial complex of unprecedented proportions. 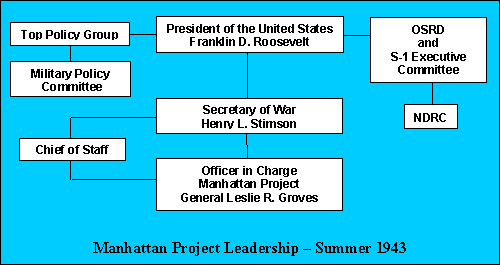